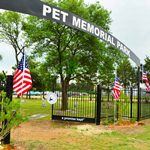 Since the 1940s, the Cedar Hill Pet Memorial Park has been a staple of our community and in the lives of the pet lovers - some famous - connected with this property. The cemetery was founded by H.H. "Snooky" Davis who was encouraged to open a pet cemetery in the area by Dr. Jack Brundett, a veterinarian who treated animals nationwide and cared for animal actors on movie sets as well as in live acts.

We believe this is how the cemetery came to be the final resting place for some of its celebrity inhabitants and well-known Dallas family names.

Among these names can be found Cimarron, the highly trained horse of Wayne Winton who was known across the country as the horse with highest IQ, performing 25 tricks, and Windy, a little dog that belonged to actress, Jayne Mansfield, whose resting place is marked by a pink headstone.

Today, the cemetery is owned by The Cedar Hill Pet Memorial Project (CHPMP). The CHPMP made a bit of history themselves by relinquishing private ownership of the property and creating a non-profit with a mission statement that pledges to save and maintain this property in perpetuity. The Pet Memorial Park is considered to be a community asset that belongs to all the families of over 550 pets buried here. 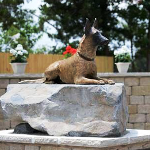 On May 31, 2014, the CHPMP War Dog Monument was placed in the park. It is a bronze statue created in the likeness of Titus, a Belgian Malinois and a member of the Cedar Hill Police department's K-9 Unit, and is dedicated in honor of service animals everywhere. For more information about the ceremony and monument, see the news account (PDF) and a video presentation.