On a blustery April day in 1856, Cedar Hill was struck by a violent tornado that claimed at least nine lives, damaged property, killed livestock, and reportedly left only two structures standing. In the days that followed, the enormity of the event sank in as survivors went about the daunting task of restoring order to their shattered community. 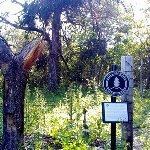 Among the survivors was Robert Crawford, teacher, and pastor of Cedar Mountain Church believed to be the first congregation in the area. Mr. Crawford owned land adjacent to the church site which was destroyed by the tornado and donated four acres to church trustees to be designated a "free and indiscriminate" public graveyard.

Local newspaper accounts (PDF) reported that nine victims of the tornado were buried on Robert Crawford's land northeast of where the church had stood. They included:

Almost 150 years after the tragic event, local historians began the process to have the site officially designated as historic. Research revealed that the burial ground was the first integrated graveyard in Dallas County, the significance of which was part of the 2006 Texas Historical Commission's recognition of Crawford's Tornado Graveyard as a Historic Texas Cemetery.

The graveyard was reconsecrated in a blessing ceremony on October 7, 2011, and coverage of the event was provided by Andrea Lucia of local CBS affiliate station KTVT Dallas. The Texas Historical Commission marker was officially placed on the site April 29, 2012, the 156th anniversary of the tornado.